Whose Story is It Anyway? 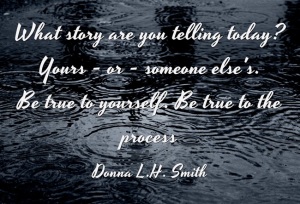 I talked about this before, when I had “dueling” editors/mentors, but most of all, it comes down to you, the author, to decide what story you want to tell. Editors, friends and others will always have an opinion about what your story should say, and how you should say it.

Recently, I put this to the test. I joined a genre writer’s group. I was testing my premise to see if it had enough hook and would hold water, so to speak. I failed to mention that I had already written the whole book.

I got some pretty wild answers. My premise for Meghan’s Choice is that a young woman in 1871 gets an unusual ultimatum from her father to work for a year, so she accepts the first job offered and it takes her to a wild Kansas railroad town.

What I asked of this group was: would a father in 1871 do such a thing? A loving, well-to-do father who would like to see his daughter married to a well-to-do man, and happy.

I learned it’s hard to make a spoiled girl likeable. I tried, and I did need help with that. I asked the group what a loving father from that time would do to help his daughter grow up enough to be ready for marriage. I got some wild answers. “Take her allowance away!” “Disown her.” “Shut her up in the house and don’t let her attend parties or spend money!” “Punish her in severe ways so she gets the message.” “Make her marry someone she hates.”

Excuse me. Her father is kind, and what is the kindest thing he could do – out of love? Make her work for a year before marriage. Because back in that time, women didn’t work, unless they HAD to. So, my challenge was: under what scenario does this girl have to find a job without being an orphan? Because that’s the plot device I’ve seen the most. The girl’s orphaned at the beginning. The last parent dies. OR – she runs away because she’s being forced to marry someone she can’t stand, and her father is making her do it. I felt there had to be a better way.

As I wrote this story, I tried to think of something different. I tried to think of things that were unusual and possibly unique. Because I have read several historical romances where the father is forcing the daughter to marry someone she can’t stand – so she runs away and finally meets the man of her dreams. I’ve also read several historical romances where the last parent died, sending the girl on a journey to some distant relative she doesn’t know – and finally finds her destiny. Come on. Isn’t there any other way? I wondered about that. That’s when I came up with a possibly improbable scenario, but I felt I could make it work.

Be true to yourself. Be true to the process of writing and revisions. But ultimately, it’s your story.

Meghan’s Choice is my story, and ultimately, that’s how I wrote it. Whose story is it, anyway? Post a comment and let me know.

2 Comments on “Whose Story is It Anyway?”