It’s all the rage with publishers and writers these days.

Why do publishers want you to write in Deep POV? The reader gets into the head of the viewpoint character in a rewarding and intimate way with Deep POV. Click to Tweet #amwriting #DeepPOV

It used to be that most POVs were acceptable, as long as they were consistent. That’s changed with the advent of Deep POV. 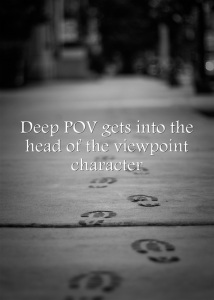 Continuing where we left off last week, here are a few more tips to help you write your viewpoint character in Deep POV. We talked about getting into character last week. In Deep POV, we are in their heads, seeing the world through the character’s eyes, ears, smell, taste, and touch. Intuition is also part of our makeup. You know, those things you don’t know how you know. The impressions you get.