I’m not a suspense writer, but I love to read it. A few years ago, I wrote Zorro stories on FanFiction, and I learned a little bit about creating suspense, just by doing it. In this new series, we’ll talk about what suspense is, and how to use it for whatever genre you write. Suspense asks the question “what will happen next?” Click to Tweet #amwriting #creatingsuspense

Think of movies classics, such as any Alfred Hitchcock suspense thriller. In “North by Northwest,” Cary Grant’s character is mistaken for someone else. He spends the entire movie trying to figure out how to either get away from the crooks and sometimes the police, while trying to figure out who George Kaplin is, the man he was mistaken for. Will he figure out what’s going on? That’s what keeps us watching. If it were a book, that’s what would keep us turning the pages. 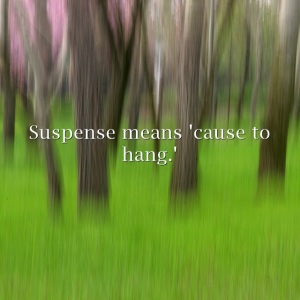 So, our first question is, “What will happen next?” The story should begin with a larger question, and in “North by Northwest,” the larger question is: Who is George Kaplin and what’s he up to? Because Cary Grant’s character, Roger Thornhill won’t get any peace in his life until he finds out.

New questions will surface along the way that also must be answered, but they should all relate to the “macro” question, according to James Scott Bell, in his book Conflict & Suspense.

Suspense is withholding resolution until the last possible moment. It’s a postponement. In your story, the predominant delay will create insecurity, doubt, and confusion. These emotions are strong and when experienced by the reader, will keep them turning the pages to answer that question of “What will happen next?”

In this series, we’ll address all the avenues and techniques of creating suspense. We’ll look at cliffhangers, dialogue, different types of suspense, and how to create it to enrich your story and make it a page-turner.

The first thing I tried in writing my Zorro stories, and in my novel “Meghan’s Choice,” was to change viewpoint characters to build toward a climax. But there’s so much more, and we’ll be looking at it, learning from the best. The word “suspense” is from the French language, and literally means “cause to hang.” Click to Tweet #amwriting #creatingsuspense